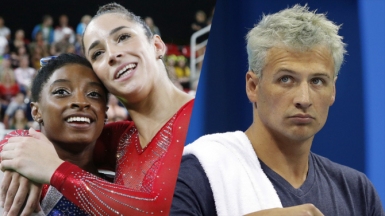 I have never been much for ceremony. Neither Michael Phelps leading the U.S. team into the Olympic Stadium nor the pomp and circumstance of the opening and closing ceremonies of the 2016 Olympics interested me. I marveled at both the individual and team efforts, especially those of the Brazilian and the U.S. teams. As always, Olympic performances do not fail to impress.

The U.S. women’s gymnastics team was particularly astonishing, and not only for their individual talent and skills. Gymnastics seems to represent pure generic physical talent and skill. Yet there is a very important mental factor. I grew up near the beaches of Southern California and played volleyball there myself as a teenager. Naturally, the beach volleyball competition drew my attention. Each team has only two players; the indoor variety involved plays by the larger teams that are more complex.

I was amazed when I heard a commentator describe Michael Phelps’ unique physical characteristics. Wingspan wider than his body height, lung capacity several times larger than the average person, huge hands, a long torso and double-jointed limbs, all contributed to the success of his drive to win. His superior performance became less surprising. Yet, there is much more to Olympic performance than physicality.

A Special Kind of Olympic Teamwork

Something very special about the U.S. Women’s Gymnastics Team drew my attention. The “Final Five” were a team in the truest sense of the word. Gymnastics is an individual sport. Whether on the uneven parallel bars, floor exercises, etc., it is all about the perfection of individual performance. The team called themselves the Final Five because their world-famous team coordinator, Martha Karolyi, was to retire after the 2016 Olympics, making them her last of many Olympic successes. Their “team spirit” was exceptional. Simone Biles talent reigned supreme. Yet her teammate Aly Raisman performed her role as team captain as superbly as her own spectacular comeback performance.

The mutual aid and support of the five young women who work so well together reminded me of the total commitment and training of the Navy Blue Angels or the Air Force Thunderbirds aerobatic teams, whose individual performances and mutual coordination constitute life-or-death challenges every time they fly. I saw a documentary once depicting the level of precision piloting, interpersonal coordination, rigorous physical training, and individual discipline required for the Thunderbirds’ achievements in formation flying. They have to do extreme physical training in the gym in order to handle the extreme g-forces their maneuvers entail. The level of individual commitment and mutual trust is almost inconceivable to a non-pilot or even an ordinary pilot. But it is not about the flying itself; it is about the almost unbelievable level of coordination and self-control needed to accomplish their mission. Very similar qualities were quite evident in Simone Biles, Aly Raisman, and their teammates.

Enter Ryan Lochte and friends. As one commentator put it, his performance represented the worst stereotype of the “Ugly American” during his night on the town with his teammates in Rio de Janeiro. It reflected the unfortunate reality of, as the commentator said, the attitude that, “Anything goes south of the equator” for white wealth and privilege. It is not just that some athletes partied most of the night in town after the high stress of competition. That would not be unusual or outrageous in itself.

After urinating in public and vandalizing property at a gas station in Rio, Lochte and his white-privileged friends figuratively urinated on the brown people of Brazil. Exercising their sense of self-importance and privilege, he and his teammates lied about their vandalism. A security guard at the gas station had confronted them demanding that they pay for the damage they had done. Exercising their sense of privilege, they denied their own culpability and projected it onto the security guard. They falsely claimed to police that someone impersonating a police officer had robbed them.

Later, on reflection, Lochte exacerbated his culpability in response to Matt Lauer’s softball questions in a televised interview after his return to the U.S. He gave pathetic partial excuses, claiming he had “over-exaggerated” what had happened. Say what? His “apology” did not really extend beyond excusing his behavior by reference to his drunkenness. The Ugly American plunders the world, then blames his victims and claims he did not really mean to do any harm. The U.S. media meanwhile ponders the financial cost of his losses of corporate product endorsements. Give me a break.

Camaraderie of a Higher Order

It is hard to imagine Lochte’s and his fellow swimmers’ behavior in the home of their hosts having been much sleazier. The contrast with the women of the U.S. Gymnastics Team could not be greater. Its members represent not just the best of athletic performance, but also the best human values of self-discipline and mutual aid.

The positive energy and mutual support of the women of the U.S. Gymnastics Team were a remarkable sight. In a sense, they represent far more than a superb athletic achievement. Even more important, they symbolize what humans are capable of when they put their minds, bodies, talent, and skills to the test. These women stepped up, took the challenge before them, and did what they had to do to meet that challenge together.

These are exactly the qualities that we need most to pull off the Next Great Transformation of human economy from environmental plunder to ecological harmony. Too much in the behavior of the Lochte gang reflect the widespread U.S. culture of corporate greed, self-righteousness, and individual self-aggrandizement. Lochte’s false contrition reflected a total lack of compassion. Simone, Aly, and their teammates have shown a higher order of respect and camaraderie, capable of great things, capable of achievements greater than we could have imagined.

Today, as a society we face challenges that require social changes so deep they too are hard to imagine. As a nation and as a species we face the necessity of making changes that go far beyond what might seem to be the limits of our capabilities. Just as on the gymnastics floor, no guarantees assure success. Far too many of us are complacent or indifferent to the damage we have done to our home – the planet.

In thinking of what lies ahead and the level of social mobilization needed to deal with the climate crisis, I often think of the economic and social transformation U.S. society accomplished through collective effort in order to fight and win World War II. The level of effort and social mobilization necessary to stop global warming at 1.5 degrees Celsius above pre-industrial levels in order to avoid catastrophic consequences will be far greater. In that effort, we will all need to behave like a Simone Biles or an Aly Raisman.