It seems a lot of retired men take up woodworking. At Santa Fe Community College (SFCC) I have met quite a few. Some are immensely talented and/or just have a huge storehouse of knowledge and experience. As with many fields of endeavor, only time and talent limit the depth and breadth of understanding possible in woodworking. 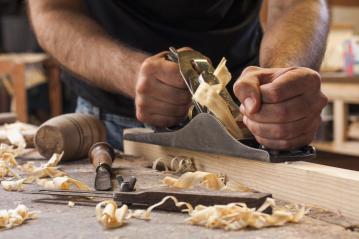 One of the most skilled of those I’ve met at SFCC is a woman who retired from a career as an ethnographer. In the typical class of 12 in the woodshop, ‘elder’ know-how is balanced by some very creative younger talent. It is a great experience to work with these folks. The environment is remarkably cooperative and supportive. Ideas and knowledge are shared; polite critiques and useful suggestions organically emerge from conversations about how to approach a problem of joinery, finishing technique or aesthetic design as a project evolves. It brings to mind an ideal image of how apprenticeships might have worked in shops producing for local communities and regional trade in the pre-industrial pre-corporate world of clear-air and artistry.

Craftsmanship is not quite a lost art, though it might seem so. Industrial production, with its outsourced cheap mostly unskilled labor and highly automated production processes, has resulted in an overabundance of unimportant transitory products. Have you ever really thought about why a cable-television program such as “Storage Wars” exists?  So many people in so many suburbs across America have accumulated so much stuff, that a whole industry has developed just to store the overflow.

The glut of unused abandoned yet “valuable” consumer products that people are not yet willing to call waste, produces the ‘demand’ for all those commercial storage lockers. Without such ‘pre-waste’ there would be no need to find space for the overflow from garages where no cars can be parked because of the clutter.

Excessive extraction of materials needed to produce all that stuff, using gigantic mining and earth-moving equipment is seriously straining many living Earth systems, disrupting otherwise stable ecologies. The quantities of energy used, from mining to shipping to manufacturing to shipping again to warehousing to super-store display, are hard to grasp. It is all mechanized and automated to reduce labor costs in order to supply cheap stuff to feed the consumer culture. And they call it “progress.”

The whole global process is, of course, disrupting climate to a point fast approaching catastrophic collapse and global chaos. Too many “environmentalists” think we can fix the problem with new technology and substituting depleting resources with new materials. Instead of cutting back on their profligate consumerism, they want to “fix” the environment by recycling over-used materials and using just as much energy from more “sustainable” sources.

Instead, they could choose to live a less carbon-intensive “low-tech” life, buying only what they really need, goods the production of which is labor intensive rather than capital intensive. That would, of course, entail more work and more jobs. It would also entail a new great transformation in the way we live in relation to the planet and each other.

What if we all re-focused on smaller scale production of higher quality useful goods that last and require us to apply craftsmanship in their making? Many human-scale tools are available that require no energy inputs except those of the human head and hand to get the same work done.

Oh, but that would take more time to produce. Yes, and that would mean jobs, jobs, jobs! Everyone could have one. More people are turning to human-scale production. As it turns out, small organic farms are significantly more productive than giant factory farms are. They also restore soils to a natural state in which they provide the nutrients missing in industrial agriculture. Given the power of the neo-liberal corporate industrial economy, making the transition to a viable low carbon emissions future is the hard part. We have the tools. We just need to figure out how to transform extractive economies into ecological communities.

The experience of making meaningful things (or performing meaningful services) is exactly what is missing in our declining perpetual-growth industrial economy and is exactly the economic model needed for mitigation of climate chaos and for ecological restoration. Look for hand-crafted products, locally made. Become a “locavore.”  It’s our choice: Creativity or Catastrophe.