Do you remember the 2016 Republican presidential primaries? Expressions of disgust and derision for upstart outsider Trump among the party establishment and clamoring candidates were widespread. My, how times have changed. Initial faux principled “anything but Trump” stances dissembled into fake adulation and obsequious pandering by congressional Republicans to an increasingly erratic fake president.

Henchman after henchman fell to indictments by the special prosecutor. Convictions and cooperation agreements correlated with outside evidence of Trump agents’ multiple contacts and financial dealings with Russian oligarchs, and intelligence agents, and international money-laundering banks (especially Deutsche Bank). U.S. intelligence agencies had warned of Russian attempts to penetrate U.S. election databases; Russian bots and trolls deployed to Facebook and Twitter. Putin’s evil is so much more sophisticated than Trump’s narcissistic bravado that it became a national embarrassment.

Republican politicians refused to allow evidence or testimony to enter intelligence or judiciary hearings. They just repeated the “no Russian collusion” mantra, even as grand juries handed down indictments of Russian agents and their American contacts associated with Trump. ‘Pay politically to play financially’ reigned supreme as rewards for cooperating with corruption piled up and those facing reelection avoided political punishment by the nastiest elements of the Trumpist white nationalist base. 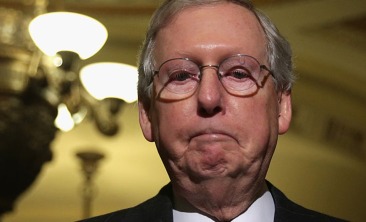 Well, of course, there are reasons why these politicians put away any principles or preferences they previously proclaimed, including basic Republican values and policy principles, such as fiscal responsibility. Just look at the rewards and punishments involved. Huge tax windfalls for wealthy senators, representatives, and their corporate sponsors rewarded submission to the petulant whims of the sociopathic narcissist. Trump’s tax bill gave away hundreds of billions to the biggest corporations and the wealthiest Americans. Mitch McConnell’s pockets got their share.

The threat of being “primaried” by aggressive PAC-funded attacks by the Trumpist base in upcoming campaigns certainly got the attention of Republican senators and representatives up for reelection in 2020. They might have considered a principled stand against executive usurpation of the constitutional authority of Congress over government spending, but not under that kind of threat. Many found the false assertion of a “national emergency” as cover for commandeering funds designated for military projects both repugnant and blatantly unconstitutional. Yet, they buried their principles to secure their personal political position.

A few voted in support of the bill to overturn the proclaimed “national emergency,” mostly out of fear that the precedent could result in a future Democratic president pulling the same stunt to achieve some progressive purpose, such as funding the hated Green New Deal. That is not the art of the deal; it is extortion. It is not that such tactics are rare in Washington politics. Nor is it simply a matter of traditional “gridlock” in the national legislature.

When a narcissistic sociopath “makes policy,” you can be sure that the origin and intent have to do with self-aggrandizement, not the public interest. I have not fact-checked the story that Trump’s obsession with “the wall” began when campaign aides suggested it as a way to make him remember to mention the “threat” of immigration. But it fits the profile. The meme took off and he happily continues to exploit it.

Generating fear of the other is a classic tactic of would-be dictators and tyrants. So is endless repetition of the “big lie.” The flow of illegal immigrants across the southern border has steadily decreased for a long time. Most drug smuggling occurs at the biggest ports of entry. Would-be terrorists from the Middle East have boarded airliners in Europe or elsewhere with false documents, headed for major American cities.

So, what’s with the wall? Its basic function is to generate fear and hatred to distract from the damage done to the nation by kleptocratic corruption at the very top – a classic tactic of tyrants.