I cannot count the number of times I have heard of some federal “Preemption” of a State Law in recent years. Each time, the winner is some corporate polluter or other practitioners of the “externalization” of environmental or societal costs of its operations. Such corporate criminals have destroyed countless ecosystems and, ultimately, destabilized most of the important elements of the larger Earth System we all depend on for life.

Trump has tried to roll back California’s more advanced automotive emissions standards by asserting presumed Federal preemptive authority to limit progress in reducing air pollution. That is part of his overall plan to destroy as many environmental protections as he can get away with. His goal: release the hounds of plunder capital.

Trump’s decimation of the professional and scientific staff as well as many Environmental Protection Agency (EPA) regulations is well known. He has gone much further than I had imagined in taking arbitrary executive action to contravene the intent of laws passed by Congress. However, a larger issue here, rarely discussed, is far more important for the future of democracy in America than the perverse practices of a deranged pretender to the presidency.

Why should we allow the federal government to “preempt” local or state laws meant to protect and serve the citizens of the smaller jurisdiction? Well, there is a clause in the Constitution. And, of course, as John Lennon said not long before he was assassinated, “They’ve got all the weapons; they’ve got all the money. It‘s all there.” Nevertheless, power does not make right. 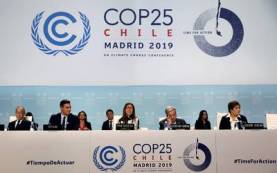 I just reviewed the “program” of the current UN Climate Conference, COP25, in Madrid. What a convoluted collection of activities, few of which seem to have anything to do with coming to the critical international decisions necessary to stave off the most extreme forms of climate chaos and their destructive consequences for people and planet. Often big is not better; it may be far worse.

We need local and regional climate action now, precisely the opposite of the global actions the world’s politicians claim to be working for but do not. A number of factors make local community action more viable and efficacious. Yet, we must recognize that humanity faces a difficult dilemma.

On the one hand, the globalized corporatocracy of nations so deeply depends on the failing model of endless economic growth that they will not act in the interests of humanity. On the other hand, the people of the industrialized world, from which most of the damage emanates, likewise depend on the corporate economy for their livelihoods. Who is willing to give up what? Nobody and nothing, leading to semi-unconscious collective suicide.

Only by breaking those ties and asserting community sovereignty can We the People “shrink the technosphere” that is destroying our Earth System, and take direct action to restore ecosystems where we live. Democracy rises up from the people; it does not emanate from political or financial elites. Community sovereignty may be the best strategy for decarbonizing human activity for our survival.