As Republicans try to drive a wedge between “centrist” and progressive Democrats, the Democrats might not need any help to achieve failure. They are well on the way to falling flat in front of the unique challenges they face in a bizarre couple of years running up to the 2020 presidential election.

DNC operatives and their favorites, the candidates who spout conventionally “liberal” slogans yet act like Reagan Republicans still control the Democratic Party. They take large corporate donations and “dark money” that tie them to the neoliberal economic thrust that takes us closer to full-blown climate chaos each day. Well, actually, the crisis is here and it is now.

In the run-up to the 2016 debacle, I remember seeing a survey posted online by Senator Keith Ellison asking Democrats to respond with their three top priorities for the Democratic Party Platform. The list provided did not include any mention of climate action, the overwhelmingly denied and ignored yet most critical issue of our time. Here is the list:

Okay, these are all issues that call for political action to achieve a livable society – in the abstract. Each is general enough that a politician could proclaim allegiance to taking action on it without actually having to do anything. The climate silence was deafening. The current listing of issues in the 2016 Party Platform on the party website does mention “Combat Climate Change,” briefly in the middle of the list. Once Bernie from contention, the greatest existential threat to humanity ever, Hillary mostly ignored it through the campaign. However, fear of a Trumpist future caused the 2018 midterm elections to blow a fresh new breeze into the U.S. House of Representatives. 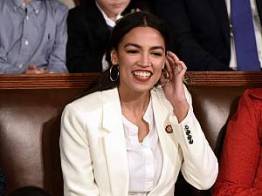 Alexandria Ocasio-Cortez (@AOC) rapidly emerged as the face of the new progressive Democrats elected to the House in the midterms. Her unexpected trouncing of an old-line centrist incumbent in the primary quickly became the icon of new progressive thinking among the new representatives, who are mostly women of color.

A good measure of their impact and importance for possibly bringing the Democratic Party into the twenty-first century is the outrage and disdain expressed by Republicans at AOC’s very presence. Her highly articulate and charming outspoken expression of progressive values and her specific legislative proposals took the media’s attention away from the old party hacks.

The new progressives have already proposed a Green New Deal and helped shape HR-1, the bill that would take back control of politics from Big Money and give it to the people through electoral reform and other measures to protect democracy from the corporate state. Mitch McConnell predictably called it a “power grab,” yes, they replied, a power grab for the people.

The Struggle is On

The Corporate Democrats are not about to give up. They have already joined Republicans 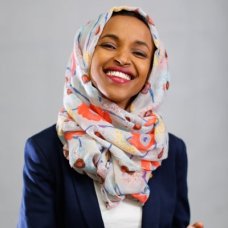 in attacking Ilhan Omar (@IlhanMN) for her calling out knee-jerk American political support for Israeli oppression and war crimes against the Palestinians. Omar had tried to distinguish between anti-semitism – of which anyone who criticizes Israel’s policies is accused – and reasoned and principled foreign policy by the U.S. But the women of color who expressed their solidarity at the State of the Union address by wearing white in honor of the original suffragettes, are strong and they are not about sit down and shut up as subservient freshmen representatives.

The Green New Deal may be only a policy preference piece, pointing in the direction of the extreme decarbonizing actions required to avert the most extreme threats to human survival inherent in the accelerating climate chaos we have already begun to experience. In one of the most honest assessments of the extreme crisis we now experience, David Wallace-Wells article in the New York Times is aptly titled, “Time to Panic: The planet is getting warmer in catastrophic ways. And fear may be the only thing that saves us.” It seems that the only politicians to get it and openly discuss it are the new progressive representatives.

The American people are wising up. They see the catastrophic climate changes already accelerating around the world. They can no longer imagine the U.S. as a sanctuary for the industrial-consumer “lifestyle” in a world of growing chaos. The Democrats would do very well to acknowledge the extreme existential threat we face and make it the centerpiece of their platform. But the new progressives must take control of the party if it is to represent the interests of the American people.