I never stop marveling at the sophisticated complexity of modern technology. The fine performance of that flathead V-8 engine in my 1951 Ford when I was in high school was fully understandable by the average teenager at the time. Today, most of us do not have a clue about how the technologies we use every day actually work.

It is even worse than that. When I taught university students how to do research, I often gave them a “basic skills” test at the beginning of the semester. The test included a question asking where their water came from. Most were unable to describe much beyond the kitchen faucet. Some might argue that we don’t need to know the technical details, just how to turn the faucet on and pay the bill. Tell that to the children of Flint, Michigan. Complexity has power, but can be very dangerous.

The Simple and the Complex in Technology

I’ve always been curious about how the technology I use works. I learned to fly airplanes in 1976. I already understood aerodynamics and studied it further in preparing to get my pilot’s license. Decades later when I retired, I built my own airplane, a Glasair Sportsman II, with the assistance and direction of some incredibly knowledgeable mechanics. You could say that I know my airplane pretty well.

But there is so much more to modern technology than that. When the fuel pressure indicator on the flat-panel primary flight display went wild (see previous posts, “Up in the Air Again,” and “Decision to Land”), I could not determine with certainty the technical source of the way out-of-range indication while cruising at 10,500 feet. Normal fuel pressure is 25 psi; at one point, indicated pressure shot up to 107.

Was the fuel pump failing? If so, why would the pressure be so high, instead of lower than normal? Would excessive pressure burst a fuel line or connection, leading to a fiery crash? Or, was it just a false reading due to a faulty sensor? No answer to this “mission-critical” question was possible in the air. Even if a catastrophic outcome were unlikely, if it is possible why risk it?

After I made an emergency landing, it took a couple of hours of disassembly and checking various potential sources of the aberrant fuel-pressure reading. A young A&E (Airframe & Engine) mechanic from Alaska diagnosed the problem. He determined that the fuel pump, with its reputation for being “bullet-proof,” was likely not at fault. Besides, producing such high pressure made no sense. Since there were no obstructions in the filters, the fuel-pressure ‘sender’ appeared to be defective (a $32- part). Lucas is a clever innovative mechanic. He used a pressure gauge from his air compressor to test the actual fuel pressure; he got a steady reading of 30 psi. The difference was likely due to the difference between how it read air versus fuel pressure. But it was steady and close to spec.

I had lots of time to contemplate simple complexity as we waited over the weekend to order the part for overnight shipment. In Truth or Consequences, New Mexico, the nearest airport when I decided to land ASAP, we awaited shipment of a new fuel-pressure sender. The “overnight” shipment, ordered Monday, took two days to arrive. Due to the long wait, it cost about a thousand dollars in lodging, food, and incidentals to obtain and install that $32- part. The actual installation took about ten minutes.

No Fail-Safe Technology for the Planet

No matter how sophisticated human technology may become, it is never fail-safe. The ill-fated Challenger spacecraft had many redundant fail-safe systems when it exploded after launch due to a simple oversight. Teams of corporate engineers could not figure out the problem; it took famed physicist Richard Feynman to give a simple tabletop demonstration of the failure of an ordinary o-ring due to freezing weather. Bureaucratic inertia and profit motive were the culprits. 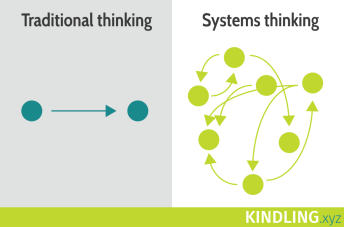 The culture of modernity is stuck in traditional thinking. We live in a world of complex adaptive systems within a vastly more complex Earth System. We must begin to practice systems thinking. No fail-safe technology protects the Earth System against the destructive effects of ever-growing economic production. But increasingly complex and wasteful technologies of extraction, manufacture, distribution, sales, and use devour depleting planetary resources and destabilize living earth systems. We must become aware of the possibility of all sorts of failures, from the smallest device to the planetary ecological and climate disturbances our technological hubris has now produced.

Ecological necessity now calls upon us to engage in a fix so large and complex that it is difficult even to imagine. Yet it is now imperative. “Houston, we have a major system failure,” which permeates our entire industrial economy. We must fix our planetary problem in the air. We have nowhere else to land.