Trust. Who do you know that you know you can always trust? How much does it matter to you? Do you trust your money to buy today’s value next year? Probably not. You know that several presidents have taken “executive action” to tweak the official calculation of inflation to make it look smaller than the increase in the prices you suffer at the grocery store. Now, with the current occupant of the White House caught in over 10,000 lies, how can you trust anyone anymore?

Some things are highly predictable. Others are not. As a general pattern, where I live the weather is quite hard to predict beyond the next few hours. Some days I can predict that it will not rain for the rest of the day. That happens when I have seen the voluminous data compiled into an electronic weather map that shows Santa Fe in the middle of a big high-pressure system. Easy, no rain today. 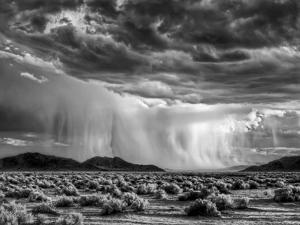 On other days, I know with a high degree of certainty that it will rain in the area, but whether it happens at my house is a roll of the dice. I can look out west toward the Jemez Mountains and see scattered rain squalls. Whether they reach my garden is subject to a number of factors most of which change as the storm clouds approach or turn north. At that level, the weather at my house is unpredictable. It has nothing to do with trust.

Trust clearly involves predictability, but that is not all. We do not trust or mistrust the weather; we just know it is only partially predictable. When we trust a person, something more is involved – moral motivation. We can predict friends or enemies’ behavior without necessarily trusting them. We may predict an enemy’s behavior without trusting them at all.

Why? Because trust is an integral part of a relationship. The weather does not predict or trust us at all. We try to predict the weather with very limited success, not because of trust but only because of past patterns that we know are often consistent, in general, if not in any specific case. We have certain expectations of politicians, but generally, we do not trust them.

We can trust some politicians some of the time. That happens when we know that they hold certain values and stick to them when it comes time to vote on a bill put before the legislative body. Various politicians trust each other because they have long-standing relationships involving moral commitments some of which cross party lines. Despite the general untrustworthy character of national politics, it seems clear that politicians have to trust each other to some extent to get anything done. That, of course, is one of the reasons politicians get so little done in this era of political acrimony.

Then, throw into the mix a president who nobody trusts and who trusts nobody. Demanding total allegiance by subordinates but “throwing them under the bus” at the slightest impulse not only causes a great deal of staff turnover. It also eliminates trust as subordinates scramble to predict the next impulsive absurdity or policy blunder devoid of any expert consultation. The sycophants struggle to make sense of their own boot-licking.

Commentators have recently pointed out, in response to the latest act of trust violation by the pretend-autocrat, that back when impeachment threatened Nixon, he continued to sign legislation the parties considered important for the nation. The parties involved had retained a sufficient level of institutionalized trust to “work together in the nation’s interest.”

In the present instance, however, where prevarication prevails and the only value demonstrated by the president is the self-indulgence and self-aggrandizement of the modern icon of sociopathic narcissism, trust is simply out of the question.

I doubt that Pelosi and Schumer trusted Trump to negotiate an infrastructure bill in good faith. Yet, they were duty bound to make the attempt. I get the distinct feeling that Pelosi in particular is playing the self-described ultimate player. Cornered by continued failures and court decisions upholding the constitutional separation of powers against his blanket assertion of total executive power, the would-be dictator flails out with increasingly erratic impulse. Even his impulse to be unpredictable is predictable. However, that is no basis for trust.