The spread of the COVID-19 in the US began later than in many other nations, but its current pattern of growth gives us no comfort. 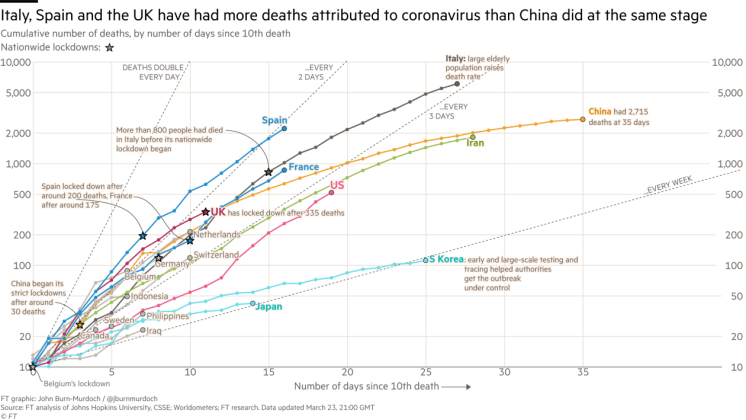 The rate of growth in the spread of COVID-19 in the US has only increased since the first few days of its appearance in the country. This chart from the Financial Times of London tells the story.

That is why EVERY community should now be on a “stay at home” regime. That is the only way to suppress the spread now.

Early and massive testing and tracing vectors to their origins to quarantine active cases could have had an early and significant effect of slowing the spread. However, the know-nothing denialist pretend-president refused to act quickly.

Look at the patterns of spread for different nations. Those with the least steep line are the ones that acted quickly with widespread testing, quarantines, and community lockdowns.

Trump would call off the national effort to practice social distancing by closing most non-essential businesses and staying at least 6 feet away from others. He values economic profit more than the health and wellbeing of the American people. Refuse to accept such foolish and ignorant impulses.

Americans naively worry about such actions violating their “civil liberties.” But liberty does not include willfully exposing your grandmother to the risk of a deadly disease. At the same time, we must resist the attempt by so-called Attorney General Barr–who is actually a political mouthpiece for all sorts of Trumpery–to suspend the Constitution to further the plutocratic interests of the oligarchs of Wall Street and DC.

Hunker down, act like grownups unfettered by compulsive consumerism, and wait out this deadly virus. Such crises bring out the very best in most folks and the very worst in a few. Soundly denounce the self-indulgent narcissists who would deny the public interest in favor of their momentary whims.