Most of us who have lived through the decades since World War II understand the advancements of the industrial age to be the essence of human progress. First, we lived in an energy-driven mechanical world involving a series of innovations and new “labor-saving” processes and products. We experienced all sorts of new jobs and professions as the industrial project continued. It called for new forms of work needed to produce new kinds of goods and services. Progress seemed the inevitable product of scientific discovery, technical innovation, invention, and production.

At the same time, we felt an evolving series of threats, from the broadly defined “Cold War,” first expressed in the very hot war in Korea – referred to at the time as a United Nations sanctioned “police action” because war was never officially declared. Then there 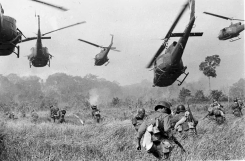 was the war in Vietnam, also never quite declared but an all-consuming national crisis of purpose and conscience. With the collapse of the Soviet Union came a brief euphoria associated with the belief that with just one “superpower” – a benevolent United States of America – would come peace. That turned out to be an illusion, based on the assumption that with the U.S. policing a world devoid of any other super power, a “peace dividend” would allow a shift to domestic priorities such as full employment, general economic growth, and pursuing the “good life.”

Well, that didn’t quite work out as imagined. Military spending continued to grow as concerns about managing “limited conflicts” and retaining global military dominance persisted. A variety of apparent “one-off” incursions, invasions, and interventions, in various parts of Latin America, Africa, and the Middle East, kept the U.S. military quite busy. So called “defense spending” did not slacken. Through the latter half of the twentieth century, we had over seven hundred fifty known bases in other nations, according to Chalmers Johnson, a renowned historian and former U.S. intelligence consultant. Johnson raised his concerns about the over-extension in his book, Blow Back.

The growing U.S. global interventionism certainly had its blow back in terms of rising resentments over both military and corporate incursions into many nations, focused mainly on gaining control over the resources needed to continue the economic growth that was the keystone in the U.S. economy. Particularly resented were the U.S. efforts to dominate and control the flow of oil in the world economy, and the continued propping up of kleptocratic regimes. The U.S., as the leading economic actor, required ever-growing quantities of oil. The vast oil fields in the U.S. had begun to decline and talk of “peak oil” grew.

There is, of course, much more to the story. That has to do with the continuing cultural illusions of global authority sustained by military-industrial elites, which resulted in both clandestine and overt efforts to control other nations. “Manifest Destiny” lived on by other names, even as the U.S. suffered the attacks of 9-11 and expanded its response to a global “war on terror,” with no boundaries and little success. Yet, one force drove the global struggles for power, the necessity for economic growth to perpetuate the accumulation of wealth.

Underlying it all, a great contradiction and looming crisis developed, at first hardly noticed, then widely denied, and continually misunderstood as the endless-growth economy and wars of choice persisted in the face of growing evidence of their absurdities and failure.

In 1944, Karl Polanyi published The Great Transformation. The book received little notice despite its profound implications for the trajectory of the industrial era. Polanyi’s deep research on the industrial revolution and its aftermath led him to conclude that a fundamental unresolved conflict had resulted from the requirements of industrial capital as it overpowered all other elements of society. He noted that various political administrations attempted to protect society from the damaging transformation of human life caused by the expansions of industrial capital. Such efforts included the English “poor laws,” and later the New Deal that responded to the crash and Great Depression of the 1930s in the U.S.

Polanyi did not find an ultimate solution to the “creative destruction” of industrial capital. Neither did the economists and politicians who ignored his warnings. Instead, the consequences have gradually emerged as the global crises of economics, ecology, and climate we all must now face.

The clash between the now global system of economic growth and the damage it does to populations around the world as it enriches the few, is coming to a head. But the damage now reaches far beyond the direct suffering of excluded humans. Both the endless extractive plunder of the resources and living Earth systems we call ecologies, and the ever-growing systems of manufacture, transportation, consumption, and waste, have seriously destabilized ecological systems and climate systems around the world.

Neither the ecosystems upon which humans depend, nor the climate that allows global food production, can retain stability under the assault of the global industrial system. We have already reached an extreme turning point. Humanity and the living Earth systems upon which we depended for so long, have entered a New Great Transformation. We caused it and we have done little to control it. But we must.

Only by taking a Radical Turn in the ways humans live on the planet can we begin to control the extreme threats to our very existence we have caused. Yet we continue to see things like resource depletion and climate disruption within the framework of the failing utopian dreams of endless progress through technological innovation and economic growth. Instead, we need to apply what we know from the best science with the necessity of transforming human economies into ecological communities. That means massive reductions in energy consumption and waste.

We must both stop the earth plunder and achieve negative carbon emissions rapidly and restore the many ecological systems that we have damaged so severely. Those systems continue collapsing as nations debate who should take how much responsibility for achieving inadequate global warming targets. Yet, public discussions almost never involve how nations and communities can achieve the necessary radical reductions in ecological and climate destruction. Hardly ever are methods of ecosystem restoration discussed. The denial of the necessity of a Radical Turn in the organization of humanity on Earth continues.

One thought on “The Radical Turn”